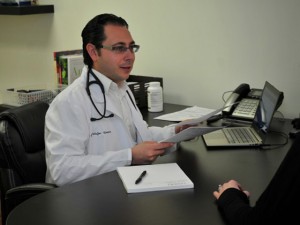 Dr. Walter Lemmo is a licensed Naturopathic Physician in British Columbia and Washington State. In 1999 he graduated from Bastyr University in Seattle, Washington where he attained his naturopathic medical education and training.

Dr. Lemmo has been a frequent guest on numerous conferences, health, radio & television programs throughout Canada and the United States and he has been published in several magazines and peer-viewed medical journals that includes a supportive guest editorial by Dr. V. Craig Jordan, known as the “father of tamoxifen”, Professor of Breast Medical Oncology at MD Anderson Cancer Center, and the Dallas/ Fort Worth Living Legend Chair of Cancer Research.

While Dr. Lemmo has diverse interest and knowledge in numerous medical fields, he has gained a reputation in the area of cancer care, and is sought out locally and internationally for his experience in this area in addition to other challenging medical conditions. He founded and is director of LEMMO Integrated Cancer Care Inc. in Vancouver – the longest operating naturopathic medical center in Canada focused in cancer. In addition, the center provides naturopathic medical care for those patients with challenging diseases and health concerns.

Dr. Lemmo strongly believes in both an integrated and collaborative approach to health care and works together as part of a team with all healthcare providers, nurses, pharmacists, family physicians, and oncologists. In fact, since 2004 Dr. Lemmo had established collegial relationships beginning with the physicians at Inspire Health in Vancouver under Dr. Hal Gunn and later with several oncologists which included Dr. Paul Klimo at Lions Gate Hospital in North Vancouver and this has continued to this day with their current oncology team.  For each patient, Dr. Lemmo provides the latest information on the numerous approaches, treatments and methods of testing available, and the options most beneficial to their diagnosis and situation. Dr. Lemmo strives to create meaning and understanding and to provide compassionate and informed care to both patients and concerned family and friends.

In addition to his practice, Dr. Lemmo is extremely passionate about creating awareness for integrative health care and the life-enhancing, life-saving treatments that many people desperately need, but cannot afford. In 2011, Dr. Lemmo co-founded Thrive Alive Foundation, a charitable organization committed to providing resources and assistance to people in need for cancer treatments and services not covered by government or health plans. Thrive Alive Foundation began operating its Thrive Support Program in 2012 and has supported patient treatments from various health practitioners, BC Cancer Agency, lodging support, throughout the province of BC and other facilities across Canada.